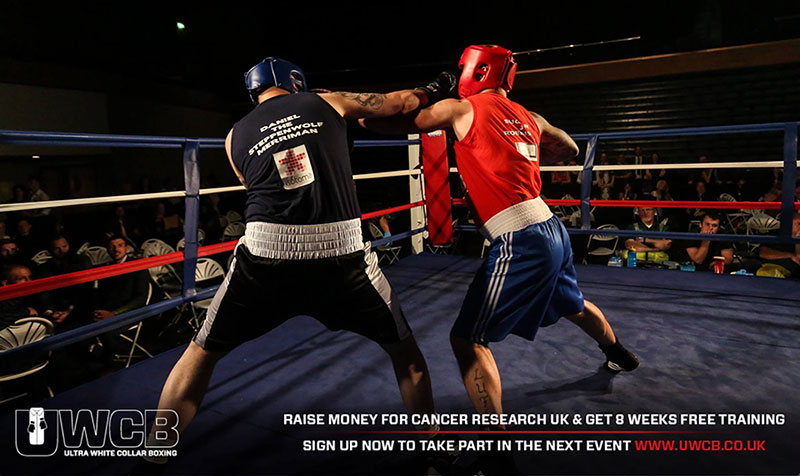 Our Project Officer Daniel Merriman took part in his first charity Ultra White Collar Boxing (UWCB) match last weekend to raise money for Cancer Research UK. In the interview below, I ask Daniel what drove him to get into the ring…

1. So, what made you decide to take part in a charity boxing match?
“It was a spur of the moment thing, really! I did some boxing at university over a decade ago, but never had the chance to fight in front of a big crowd. Then earlier this year I saw an article in the local paper about these charity boxing events, and I speculatively sent them a message asking what was involved. Three days later I was in the gym with forty other novice boxers.”

2. How long did you train for, did you discover any difficult areas in training?
“Training was two sessions a week for eight weeks at Chokdee Academy, under the watchful eye of former world thai boxing champion Rich Cadden. It brought back a lot of memories of when I trained at university, but also emphasised just how out of condition I’d become. I’d been doing some running as training for an upcoming 10km race, but the type of fitness involved is on a totally different level. There were plenty of evenings when I came home with bruises and aching joints, but it was also immensely satisfying to see (and feel) the improvement as the weeks passed. In fact, the most frustrating aspect for me was having to miss some sessions because I wasn’t able to get a lift to the gym!”

3. Tell us about the fight night…
“Fight night for me actually started around 1pm with a medical, checking my blood pressure, shining a torch in my eyes and signing the all-important medical consent form. There were then talks from the organiser and the referee, explaining the format for the evening and the rules for the event. Unfortunately it turned out that my bout was slot 21 out of 22, so I
had a long time to 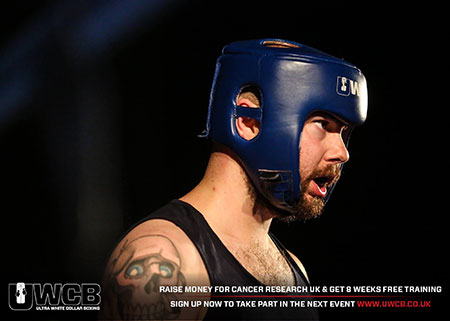 wait! I spent the next few hours out in the audience with my guests at our VIP table, watching the other bouts and trying to conserve my energy.

Eventually I went backstage to warm up and mentally prepare myself. I don’t remember feeling nervous especially, but by that point in the evening I was just desperate to get in the ring. When the announcer called my name and my music started playing, though, the adrenaline started pumping and I knew it was time to (attempt to…) put into practice everything I’d learned in the previous eight weeks.

The fight itself seemed to fly by. I had sparred against my opponent in training before so I knew he was tough, and so he proved. The first round was relatively even, but he got me with a good shot in the second round, and by the end of the third round I was gasping for air. It’s hard to overestimate just how much the adrenaline of being in the ring saps your stamina, but I had some great supporters cheering me on and they helped me dig deep and get through to the final bell.”

4. Were there any unexpected benefits to the experience?
“Well I’ve dropped two sizes in jeans, so that’s something! I guess the other thing is that I wasn’t sure how I’d feel fighting in front of such a large crowd of people – there were close to 1,000 guests in attendance, and I didn’t know how that would affect me. I’m confident enough with public speaking, having done talks in front of a hundred or so students in my past life as a lecturer, but this was a different world altogether. Once I was in the ring, though, I was able to focus entirely on the man in front of me.”

5. Have you got any plans to continue the sport?
“I’ll probably do another bout towards the end of the year, but for now I’ve got a 10km race to prepare for. A team of us from work have signed up to do the Leeds 10k next month, which will be my first race at that distance, so I need to get the miles in. A few of my friends have signed up for the next boxing event though, so I’m sure I’ll be sparring a few rounds with them over the next couple of months.”

7. What advice would you give anyone who is interested in taking up boxing?
“One of the great benefits of taking part in this event was the top class training I received at Chokdee Academy. If you have any interest in competing, definitely take your time in finding a good gym. Check if they have fighters there who currently compete at an amateur or professional level, talk to the coaches and see what the atmosphere is like at the club. Ask yourself: do I feel comfortable here? Anyone can run a boxercise class, but it takes knowledge and experience to teach a skill like boxing.

Also, don’t be afraid of being “too unfit”! There were plenty of people who fought at the event who, at the beginning of the eight week training cycle, were struggling to do a single push up. The training you’ll receive in a boxing gym, along with advice and guidance regarding diet, will get you fitter than you ever thought possible.”

Dan undertook 8 weeks of training with the professionals at Chokdee Academy to prepare for the fight. If you’d like more information about taking up the sport then please do get in touch with the team at Chokdee, or your local training centre.