We’ve had a few people in the office transition to standing desks recently and the process by which everyone achieved their goal has been quite interesting. Or at least interesting to me. 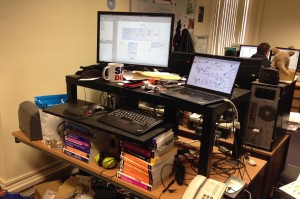 Doug was the first to try it and ended up, as a lot of people do, taking the old ‘big pile of books’ approach. It’s cheap, quick and,so long as you’re using a solid and non-tottering pile of books, probably pretty safe. Luckily the Isotoma office has a pretty extensive library of books–which in Doug’s case have mostly been memorised.

(I wouldn’t let him tidy his desk before I took this photo. He wanted me to tell you.)

A different approach that David introduced (as far as I know) and which I’ve adopted is the music stand approach. It’s a wee bit more expensive and depends on you having the kind of job that doesn’t really involve paper or double monitors – but I love it. The bonus of this approach is you get to feel a little bit like a member of an nineties synth-rock band. Always a bonus.

But the canonical Isotoma standing desk was “Ikea-hacked” together by Tom. He went to town on it to such an extent that we made him do an intranet post about it:

I’ve had a couple of enquiries about the parts for my standing desk, so rather than send sporadic emails, I thought I’d just put it here. 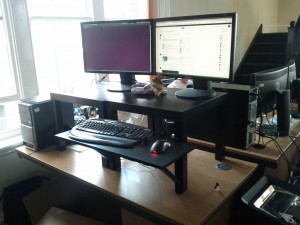 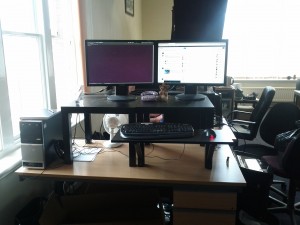 I built my standing desk based on this article, which is great, and has assembly instructions and everything (although it’s pretty trivial to put together). The guy bought all the bits from IKEA for $22. But obviously we don’t live in America, and also I needed to double up on some of the parts due to my dual monitor setup, so here is the full parts list, with links to the UK IKEA website:

Also, you will need to find 4 screws to screw the brackets into the table legs because annoyingly, the brackets have holes drilled, but no screws to go in said holes.

Oh and don’t forget, you’ll probably want some kind of chair to give your legs a rest every now and then (yes it’s hilarious that Tom still has a chair etc, but it does come in handy, even if it’s just for 2×30 minute spells during the day). I got a bar stool with a back from Barnitts 🙂

This concludes my blog post about standing desks. Please add photos of your sweet, customised desks below in the comments.