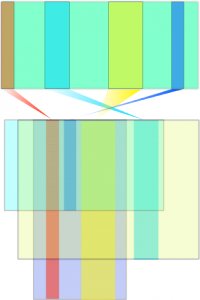 One of the consequences of the mismatches between databases and ORMs is that iterating over objects can generate explosions of database queries. Often, these explosions go unnoticed because the individual queries are fast and the number of concurrent users is small, especially during development. The explosions are sometimes hard to detect, either because developers don’t look for them or the tools that can expose the explosions don’t report everything (e.g. the Django debug toolbar doesn’t report the queries generated by ajax calls).

Django does a good job of lazily evaluating what it can, but the simple act of using the convenient dot-notation inside a loop can turn a single database query into a cascade of supporting queries.

For example, given this book model:

and this books query:

which returns 10 rows. Then this template:

would issue a single query to get all 10 rows, but would then generate 2 additional queries per iteration to get the jacket and the author for each book. So a total of 21 queries. You really need to use the Django debug toolbar to realise this – install it now and keep your eye on it until the very end of the project: it only takes a late-breaking, well-intentioned dot to cause an explosion.

A good way to detect when explosions happen is to check the number of queries in your unit tests.

Add these at the start of your project. It means you have to keep increasing the counts while developing, but it does make it obvious when something has exploded.

Remember, every one of those queries involves the following steps:

A far better approach is to get the database to do the work. It can join together the jacket and author information much more efficiently (orders of magnitude more efficiently – but that’s another topic).

Django added select_related() to try to address this problem. Given a field name, it passes the required table to the database to be joined with the original queryset, e.g.

It is limited though, since it only works with some relationships in some directions, and it pulls in all the columns which is usually very wasteful, especially if large text fields are present. Adding defer() or only() to work around this can help, but isn’t pretty, e.g.

prefetch_related() was added later to help with more complex relationships but still issues multiple queries and does the ‘joining’ in Python. Besides that, it also has a number of caveats and special interactions with other methods. Trying to combine these with annotations for aggregate counts and such would lead to some fragile, hard-to-construct and, I think, hard-to-read syntax that can fail even for slightly complicated queries.

So instead, we could issue the following query:

(note: I’ll use natural join throughout for simplicity, and short table names for that matter, but they don’t actually work as-is with Django’s table/column naming)

And then, a slightly modified template:

would only issue 1 query, regardless of the number of books.

Adding further related information to the original template will dramatically increase the number of queries, whereas joining another table to the raw SQL version will add none. Similarly, returning 20 books instead of 10 would just about double the number of queries for the original version (so 41 for our example), whereas the raw one would still only issue a single query.

As well as avoiding query explosions, there are other benefits to using raw SQL. A full explanation needs another blog post, but some of the major ones are:

I’ve tried a number of ways to embed SQL queries into Django modules:

is better, but adds too much whitespace and makes it harder to edit.

avoids the extra whitespace but doesn’t ensure enough whitespace unless you’re careful to add a space at the end of each line.

None are great and none of them provide an easy way to copy and paste the query, which is necessary to tune it and check its plan in a database client.

For a better approach, I suggest creating an sql directory (alongside models.py – it is that important) and create python modules in there to hold the named query declarations, e.g. sql/books.py:

Clicking the BOOK_DETAILS reference in any decent IDE will take you to the query. Now that the query has a bit more respect it can more easily be copied and pasted into other tools, and formatted as you’d like, and re-used without repetition.

One more note about formatting. Although you could put Python comments before the declaration, I suggest keeping the query comments inside the query because they may be useful on the server, e.g. when viewing the database logs. So instead of:

There are some downsides with raw(), however.

We can do better, as I’ll explain in part 2…

7 thoughts on “A Different View”